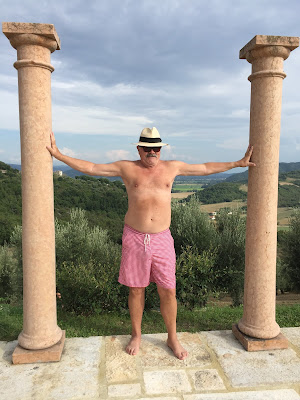 He came from South Africa to England with his friend.  He had a South African passport and he was wearing a duffel coat.  From South Africa, he brought his love of sport, love of family, his good looks and humour and enthusiasm for what lay ahead.  I think he brought the best of South Africa and was happy to leave the rest behind.
He arrived, found work, found a place to live, found friends and found Mary. He settled for Britain, married, had children, built a house, discovered Shakespeare, a school of philosophy which gave him meditation and he loved all that.  He became a teacher.  Our South African hero with his love of sport and family, his good looks and his humour, his increasing number of friends and his discovery of a philosophy where East can meet West in understanding.  He took all those loves into the classroom and became British as well.
He now had a British Passport, read the Times, played tennis and cricket, supported both South Africa and England at sport, increased his family from 4 to 8 and 8 to 10 to date.  He increased his group of friends, every new person was a new discovery to be made. He sort of retired sort but still kept on teaching because he loved the school he had helped to start and all the children loved him. He found the best of philosophy, the best of his good humour and the best of friends and the best of family and combined them all with the best of Britain and the best of South Africa.  He passed it all on to anyone who wanted to join him.
Then, the real challenge, the one he had unknowingly prepared all his life for came hurtling towards him like a rugby ball thrown by Hercules himself.  Cancer was its name.  He caught it and contained it and kept on going with as little fuss as possible.  He read the Times, he did sudoku, he watched sport, he never lost his looks, he stayed in the house he had built with the 4 plus 4 plus 10 plus friends until he had to put all that down and concentrate on waiting.  No more playing tennis, no more driving the car to the sea, gradually no more up and down the stairs but every day a little more time spent encouraging us all to meditate and to join him reading his way through the gospels as well as watching sport.  No more going out meant everyone coming in to join him in this new country called the waiting one.  They say he died on Sunday but I say, he got a new passport, a passport to Freedom and having that, could leave the rest behind for us to choose which of all the passports is the one most likely to take us where we want to go.

This post was originally posted on the You can meditate too blog.

This site uses Akismet to reduce spam. Learn how your comment data is processed.